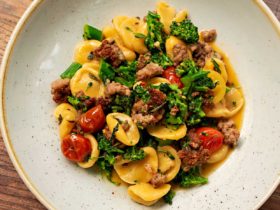 When you think of food in Miami, what’s the first type of cuisine that comes to mind? Cuban, most likely. But because Miami is such a melting pot, all sorts of cuisines get their fair share of the spotlight. Case in point: seafood restaurants in Miami. Whether you’re looking for a casual meal or a white-tablecloth experience, you won’t have to look far. Here are the best seafood restaurants in Miami.

Variety is the spice of life, and Captain Jim’s Seafood Market & Restaurant embraces that philosophy wholeheartedly. If there’s a seafood staple you’re thinking of, odds are that Captain Jim’s offers it on its expansive menu. Before visiting, though, there’s one thing you need to do: leave your diet at the door.

The seafood here can be prepared in several different ways, but the menu heavily skews toward fried. Fried cracked conch, fried fish fingers, fried shrimp, fried lobster… the list goes on. The items that aren’t fried are still substantial, including scallop scampi, shrimp and grits, and catch of the day tacos. You can also order your fish grilled or blackened if you prefer — Captain Jim’s provides that opportunity. But honestly, it’s okay to indulge here — the calories are well worth it.

Overall, the prices at Captain Jim’s are reasonable for the portion size; only a few items cost more than $20, and most hover around the ‘teens. But if you want to save a few extra bucks, consider visiting for weekday lunch or happy hour. At lunch, sandwiches and salads come with free soup, and happy hour features fried calamari, fish dip and other apps at a hefty discount (in addition to drink specials). No matter when you visit this top Miami seafood restaurant, you can expect a good time.

Whether you’re a resident or visitor, you’ve likely heard of Joe’s Stone Crab. The seafood restaurant in Miami Beach is an institution and it’s appeared in countless city guides and lists. There’s a reason Joe’s has been around for over 100 years, and that reason is quality—high-quality food, high-quality service, and a high-quality experience.

It’s important to be aware of some ground rules if you plan on visiting. First, there are no reservations. You must take your chances walking in. If you come early or on a weekday, odds are good that the wait is minimal to non-existent. If you try to visit prime time on a weekend, you better not be in a hurry. Dress nice but not too nice—no tank-tops—and you should be good to go.

Based on its reputation, you’d think the prices here would be astronomically high. But you’ll find the prices are par for the course on the beach—with one big exception: the famous Florida stone crabs. They are market price, and that means the price can (and will) fluctuate according to season. But fret not, as there is plenty of affordable, satisfying fare to be had like the jumbo lump crab cakes, lobster roll, Atlantic cod, and sautéed shrimp. Want to know a secret? The ½ fried chicken for $6.95 is one of the best deals in town—and a steal at one of the best seafood restaurants in Miami.

“F–king fancy.” The Mignonette motto is catchy and rings true about the Edgewater seafood eatery, which has been a neighborhood staple for over half a decade. That said, you’ll find all sorts of characters from all walks of life on a given night enjoying great wines, oysters galore, and a bevy of other delicious offerings.

The menu is filled with items you’ve seen before like oysters Rockefeller, shrimp cocktail, popcorn shrimp, bouillabaisse but with one key difference: They’re done to perfection. Great flavors should come as no surprise from the owner and executive chef Danny Serfer, whose first concept Blue Collar helped shine the spotlight on Miami’s budding dining scene with elevated comfort food. Serfer and Chef de Cuisine Bobby Frank are doing the same at Mignonette, albeit in a much more upscale environment.

Hence, the Plain and the Fancy sections on the menu. If you want simple fish done right, then opt for the open blue cobia or redfish with beurre blanc. Should you want to splurge, you can get a blackened cobia with shrimp etouffee or redfish with rock shrimp bomba rice and lobster broth. Mignonette offers you that choice, and we love them for that. For dessert, however, there’s only one choice you should make: the famous butterscotch Heath Bar pudding. You’ll thank us later.

Navé in Coconut Grove hasn’t been around as long as the other entries on this list, but it’s already making a name for itself thanks to its exquisite coastal Italian cuisine. Also unlike the other eateries we’ve listed, seafood is not the main focus of the restaurant—but it’s a huge part. Among the pizzas and pastas are succulent specialties that will delight your taste buds and compel you to make return visits.

Don’t let the menu header “Prepared Simply” fool you. Fresh fish like the Mediterranean Turbot with brown butter or the big eye tuna with lemon herb vinaigrette sound basic, but their tastes tell a different tale. Same for more “complex” fare like the scallops a la plancha and—our personal favorite—the snapper Milanese, the latter of which is the most satisfying piece of fish we’ve ever eaten. Best of all, it’s enough for two.

Complementing all this divine food is an ambitiously fun cocktail program. Navé is one of the Spanish words for ship, and the drinks all feature nautically inspired names such as the rum-and-bourbon-based Three Sheets to the Wind and the rye-focused Black Pearl. The list is a lot to take in, but just ask one of the helpful bartenders to steer you on the right path.

The River Oyster Bar has been one of the go-to happy hour spots in Brickell for over 15 years. There’s almost always a crowd inside and outside leaving the workday’s worries at the entrance. One of the main draws for that crowd is The River’s rotating selection of oysters, which keeps regulars and first-timers on their toes. Combined with an extensive menu of seafood and non-seafood selections, it’s no wonder the place is such a hit.

We’re not using the term “extensive” lightly either. The menu is long, and it’ll take multiple visits to make the slightest dent. Raw bites such as ceviche and salmon sashimi appear alongside flatbreads and pizzas, and then there are salads and meats—to name a few sections. Before even getting to the entrees, you’re looking at dozens of options. But do yourself a favor and avoid overeating early on: Mains like the crispy skin yellowtail snapper, salt-crust branzino, and miso salmon are all worth a look, as are the dessert cheeses.

Geoffrey Anderson
All Posts
Geoffrey Anderson Jr. is a contributing/staff writer for Dish Miami. For over six years, he has covered the South Florida dining scene with his wife for the award-winning local food blog Miami Food Pug. When he's not writing about food, he's eating it—or attending rock concerts and traveling.
Contributor

Where to Celebrate National Pasta Month in Miami 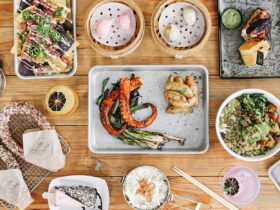 Where to Celebrate National Pasta Month in Miami